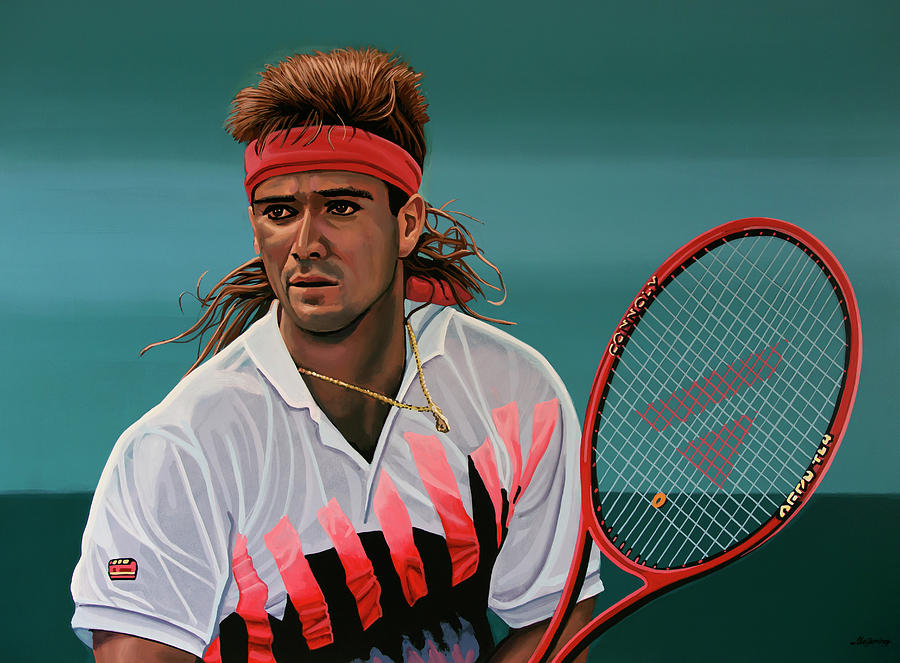 Realistic acrylic painting of Andre Agassi , painted by the Dutch fine artist Paul Meijering. The Original painting is 120 x 90 cm and for sale

Andre Kirk Agassi (born April 29, 1970) is an American retired professional tennis player and former world No. 1 whose career spanned from the late 1980s to the mid-2000s. Considered by numerous sources to be one of the greatest tennis players of all time, Agassi has also been called the greatest service returner ever to play the game and was described by the BBC upon his retirement as "perhaps the biggest worldwide star in the sport's history". As a result, he is credited for helping to revive the popularity of tennis during the 1990s.

In singles tennis, Agassi is an eight-time Grand Slam champion and a 1996 Olympic gold medalist, as well as being a runner-up in seven other Grand Slam tournaments. During the Open Era, Agassi was the first male player to win four Australian Open titles, a record that was later surpassed by Novak Djokovic when he won his fifth title in 2015, and then by Roger Federer in 2017. Agassi is one of five male singles players to achieve the Career Grand Slam in the Open Era and one of eight in history, the first of two to achieve the Career Golden Slam (Career Grand Slam and Olympic Gold Medal, the other being Rafael Nadal), and the only man to win the Career Golden Slam and the ATP Tour World Championships: a distinction dubbed as a "Career Super Slam" by Sports Illustrated.

Agassi was the first male player to win all four Grand Slam tournaments on three different surfaces (hard, clay and grass), and the last American male to win both the French Open (in 1999) and the Australian Open (in 2003). He also won 17 ATP Masters Series titles and was part of the winning Davis Cup teams in 1990, 1992 and 1995. Agassi reached the world No. 1 ranking for the first time in 1995 but was troubled by personal issues during the mid-to-late 1990s and sank to No. 141 in 1997, prompting many to believe that his career was over. Agassi returned to No. 1 in 1999 and enjoyed the most successful run of his career over the next four years. During his 20-plus year tour career, Agassi was known by the nickname "The Punisher".

After suffering from sciatica caused by two bulging discs in his back, a spondylolisthesis (vertebral displacement) and a bone spur that interfered with the nerve, Agassi retired from professional tennis on September 3, 2006, after losing in the third round of the US Open to Benjamin Becker. He is the founder of the Andre Agassi Charitable Foundation, which has raised over $60 million for at-risk children in Southern Nevada. In 2001, the Foundation opened the Andre Agassi College Preparatory Academy in Las Vegas, a K-12 public charter school for at-risk children. He has been married to fellow tennis player Steffi Graf since 2001.

Congratulations on your feature in the group OBSESSED Painters Paintings