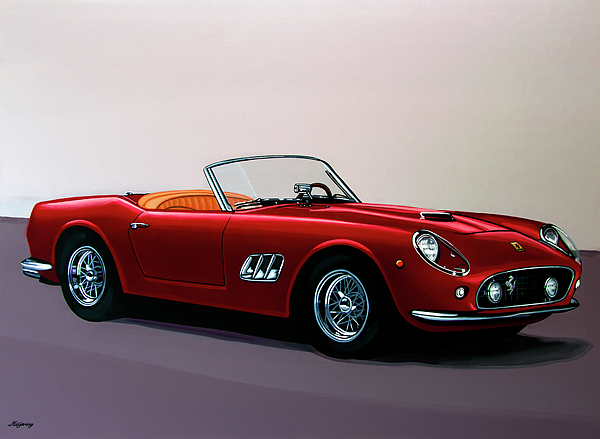 Our premium yoga mats are 24" wide x 72" tall x 0.25" thick and made from natural rubber with a blended microfiber top surface.   The top of the mat has the image printed on it, and the back is solid black with textured dimples for better floor grip.

Wash with a damp cloth and air dry.

Phenomenal work; congratulations on your sale :-))

Realistic acrylic painting of the Ferrari 250 GT California, painted by the Dutch fine artist Paul Meijering - the Original painting is 120 x 90 cm and for saleDesigned for export to North America, the 1957 250 GT California Spyder was Scaglietti's interpretation of an open-top 250 GT. Aluminium was used for the hood, doors, and trunk lid, with steel elsewhere for most models. Several aluminium-bodied racing versions were also built. The engine was the same as in the 250 Tour de France racing car with up to 240 PS (177 kW; 237 hp). All used the long 2,600 mm (102.4 in) chassis, and Pirelli Cinturato 185VR16 tyres (CA67) were standard.A total of fifty LWBs were made before the SWB version superseded them in 1960. One example sold at auction on August 18, 2007 in Monterey, California for $4.9 million