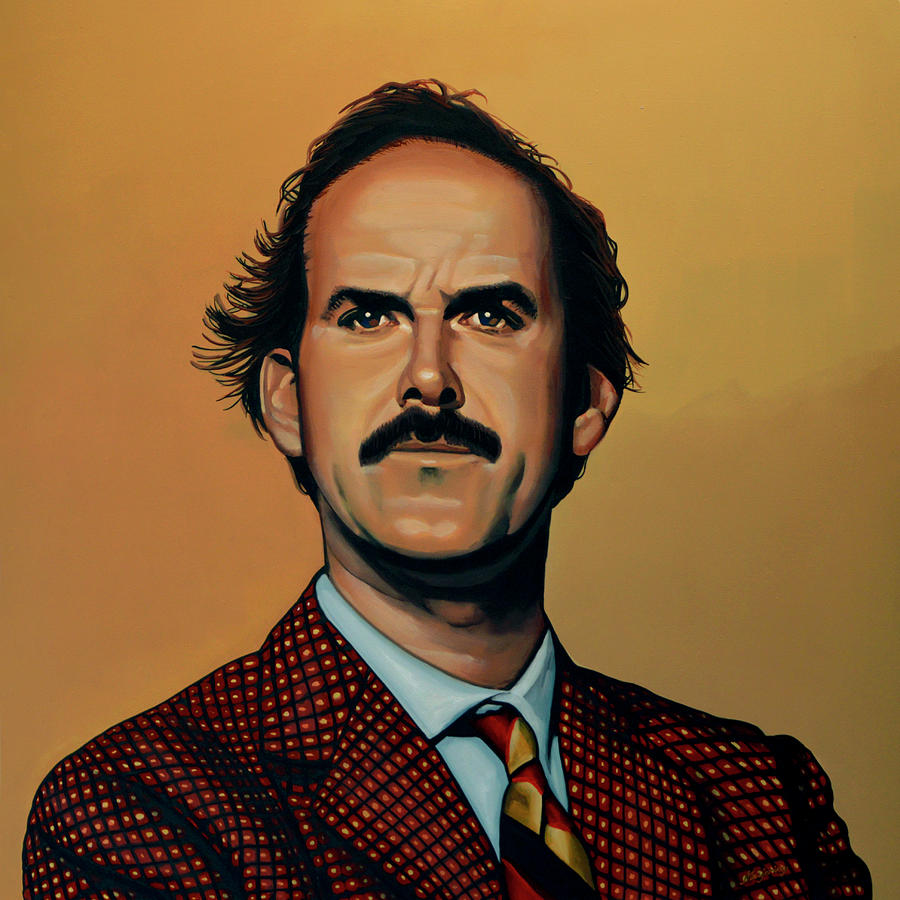 Realistic acrylic painting of the British actor and comedian John Cleese, by the Dutch fine artist Paul Meijering - The Original painting is 90 x 90 cm and for sale

John Marwood Cleese (born 27 October 1939) is an English actor, comedian, writer, and film producer. He achieved success at the Edinburgh Festival Fringe and as a scriptwriter and performer on The Frost Report. In the late 1960s, he co-founded Monty Python, the comedy troupe responsible for the sketch show Monty Python's Flying Circus and the four Monty Python films: And Now for Something Completely Different, Monty Python and the Holy Grail, Life of Brian and The Meaning of Life.
In the mid-1970s, Cleese and his first wife, Connie Booth, co-wrote and starred in the British sitcom Fawlty Towers. Later, he co-starred with Kevin Kline, Jamie Lee Curtis and former Python colleague Michael Palin in A Fish Called Wanda and Fierce Creatures, both of which he also wrote. He also starred in Clockwise, and has appeared in many other films, including two James Bond films as R and Q, two Harry Potter films, and the last three Shrek films.
With Yes Minister writer Antony Jay he co-founded Video Arts, a production company making entertaining training films. In 1976, Cleese co-founded The Secret Policeman's Ball benefit shows to raise funds for the human rights organisation Amnesty International.

I, as well, love this man. One of England`s funniest actors. Congrats on your sale, Paul, well done,

Thanks so much, Sharyn!! For your kind compliment and comment!!;-))

Huge congratulations on your sale! I adore John Cleese!

Thank you so much, for your kind words!! I love John Cleese as well!;-))

THIS IS MY FAVORITE!!

All the madness of the "Ministry of Silly Walks", "Fish Slapping Dance", and of course, Basil Fawlty. You captured them all! F/L/V

Great work Paul. Can't stop thinking of the phrase, "That is Torquay, madam"... L/F and pinned

Thanks so much, Richard, for your kind words and the pin!;-))

Thank you so much, Joan-Violet, for your lovely comment!...;-)

Congrats for being selected to this feature page and it sure is very well deserving!! v/f/t

Thank you so very much, Robert, for your compliment and the feature!!;-))