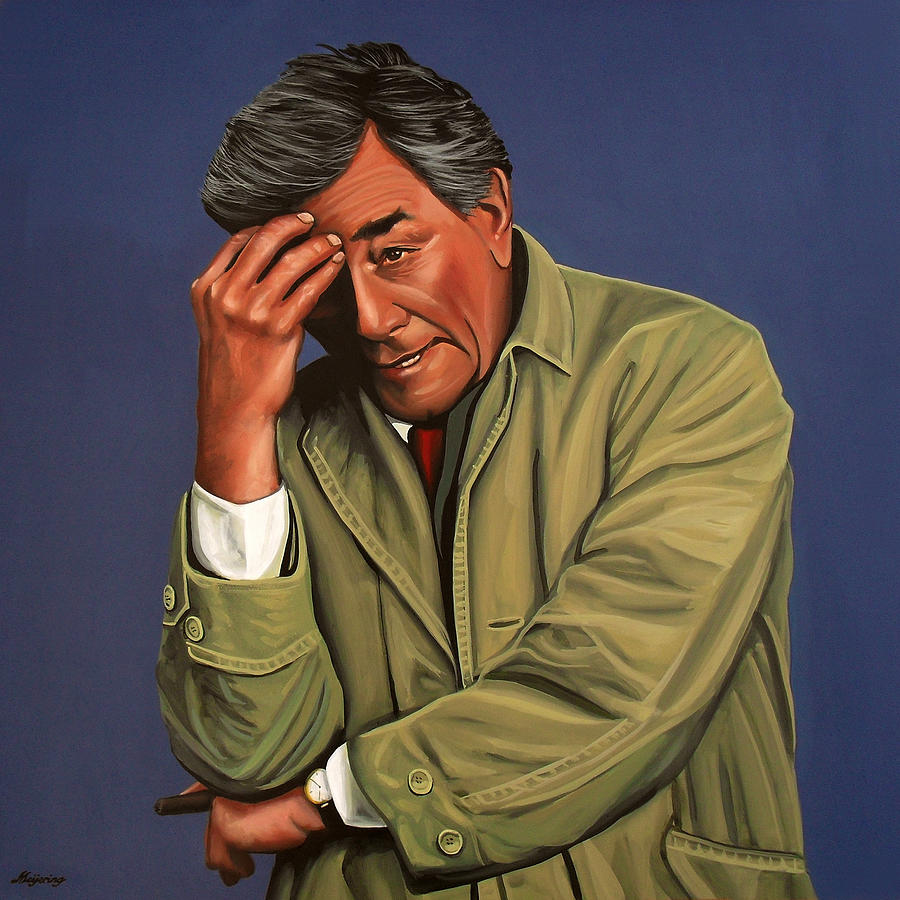 Realistic acrylic painting by the Dutch fine artist Paul Meijering of the American actor in his best known role of Lt. Columbo - the Original painting is 90 x 90 cm and SOLD

Peter Michael Falk (September 16, 1927 - June 23, 2011) was an American actor, best known for his role as Lieutenant Columbo in the long-running television series Columbo, which ran from 1968-2003. He appeared in numerous films such as The Princess Bride (1987), The Great Race (1965), It's a Mad, Mad, Mad, Mad World (1963), A Woman Under the Influence (1974), and Murder by Death (1976), as well as many television guest roles. He was nominated for an Academy Award twice (for 1960's Murder, Inc. and 1961's Pocketful of Miracles), and he won the Emmy Award on five occasions (four for Columbo) and the Golden Globe Award once. Director William Friedkin said of Falk's role in his film The Brink's Job (1978): "Peter has a great range from comedy to drama. He could break your heart or he could make you laugh."

Columbo or Lieutenant Columbo is the eponymous main character in the successful detective crime drama series Columbo. He is portrayed primarily by Peter Falk, who appeared in the role from 1968 through 2003. Columbo's first name has never officially been identified, although the name "Frank Columbo" has been visible on pieces of identification throughout the show's history.
The character of Columbo was created by William Link, who said that Columbo was partially inspired by the Crime and Punishment character Porfiry Petrovich as well as G. K. Chesterton's humble cleric-detective Father Brown. Other sources claim Columbo's character is also influenced by Inspector Fichet from the French suspense-thriller film Les Diaboliques (1955).

Congratulations your image has been chosen as a feature on "IF THE IMAGE EXCITES YOU" To ensure that your image remains available over time, you can archive your art in the feature archive discussion.

Congratulations on your sale Paul:-)!

Congratulations Paul on your feature in the group OBSESSED Painters Paintings

Awesome, I am a columbo fan and you really captured his image. Fantastic work congrats

Thank you, Laurine, for your lovely comment and kind words!;-)

This is an incredible piece of work Paul. There was always something I liked about 'Columbo', and I think you've captured it in this piece. Oh, and just one more thing...

Thank you so much, James, for your lovely compliments and kind words!!;-))

Amazing portrait Paul! I love your style! Congratulations on your sale!

Wonderfully done !! Congrats on your sale.

Congratulations, your art has been featured on the homepage of "Created by my Hands."

Thank you so much, David, for the feature in your amazing group!!;-)

Nice job! Peter seems to be very contemplative about a crime!

Thank you so much, Mario, for your lovely comment!;-)