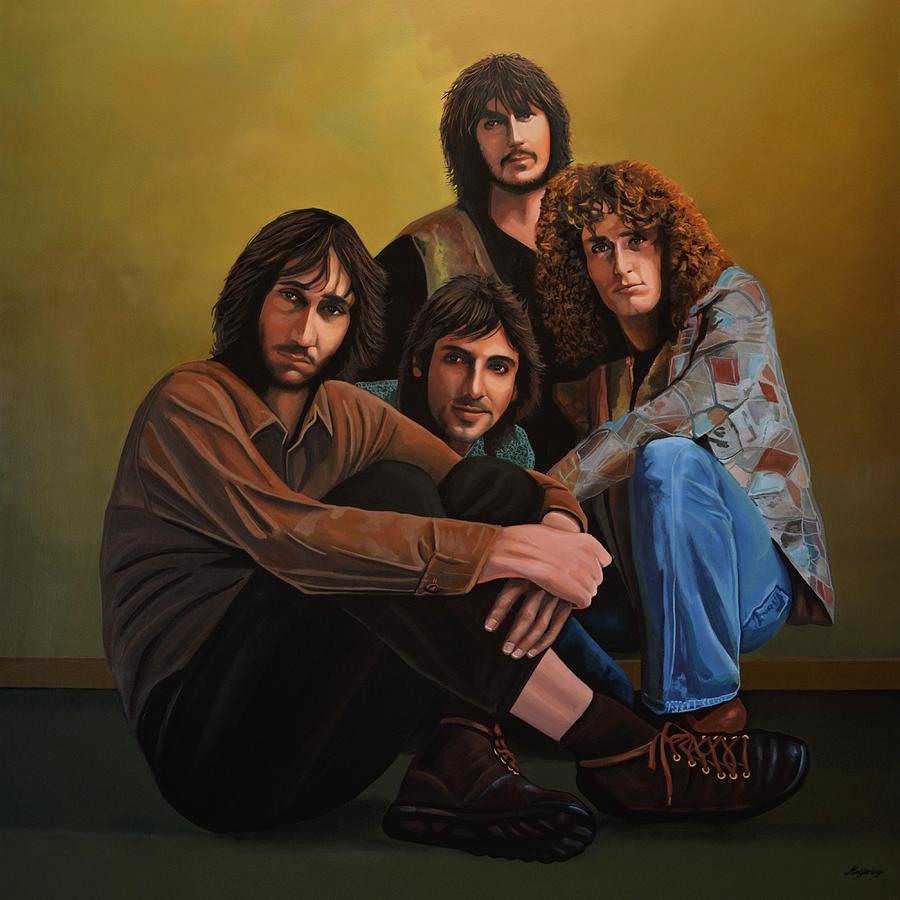 Realistic acrylic painting of the English rock band The Who, painted by the Dutch fine artist Paul Meijering - The Original painting is 120 x 120 cm and SOLD

The Who are an English rock band that formed in 1964. Their classic line-up consisted of lead singer Roger Daltrey, guitarist and singer Pete Townshend, bass guitarist John Entwistle, and drummer Keith Moon. They are considered one of the most influential rock bands of the 20th century, selling over 100 million records worldwide and holding a reputation for their live shows and studio work.
The Who developed from an earlier group, the Detours, and established themselves as part of the pop art and mod movements, featuring auto-destructive art by destroying guitars and drums on stage. Their first single as the Who, "I Can't Explain", reached the UK top ten, followed by a string of singles including "My Generation", "Substitute" and "Happy Jack". In 1967, they performed at the Monterey Pop Festival and released the US top ten single "I Can See for Miles", while touring extensively. The group's fourth album, 1969's rock opera Tommy, included the single "Pinball Wizard" and was a critical and commercial success. Live appearances at Woodstock and the Isle of Wight Festival, along with the live album Live at Leeds, cemented their reputation as a respected rock act. With their success came increased pressure on lead songwriter and visionary Townshend, and the follow-up to Tommy, Lifehouse, was abandoned. Songs from the project made up 1971's Who's Next, which included the hit "Won't Get Fooled Again". The group released the album Quadrophenia in 1973 as a celebration of their mod roots, and oversaw the film adaptation of Tommy in 1975. They continued to tour to large audiences before semi-retiring from live performances at the end of 1976. The release of Who Are You in 1978 was overshadowed by the death of Moon shortly after.

Congratulations on your recent sale of The Who, one of my favourite bands, stunning artwork.

Congratulations Paul Meijering on your featured artwork "The Who". It can now be seen on the homepage Square Art World

Thank you so very much, David, for all your support and the feature in your creative group!!;-))

Thank you so very much, Gerald, for your compliment!!;-)

Knock my socks off! V/F

Thank you so very much, Anthony!;-)

Your style and talent still amazes me. Beautiful work.

Thank you so very much, John, for your kind words, the feature and all your support!!;-)

Fantastic piece and tribute to a great band.

Thank you very much, Chris, for your lovely comment!;-)

This is superb, my fav entrance in the wall candy contest l/f

Thank you so much, Joan-Violet, for your kind words!