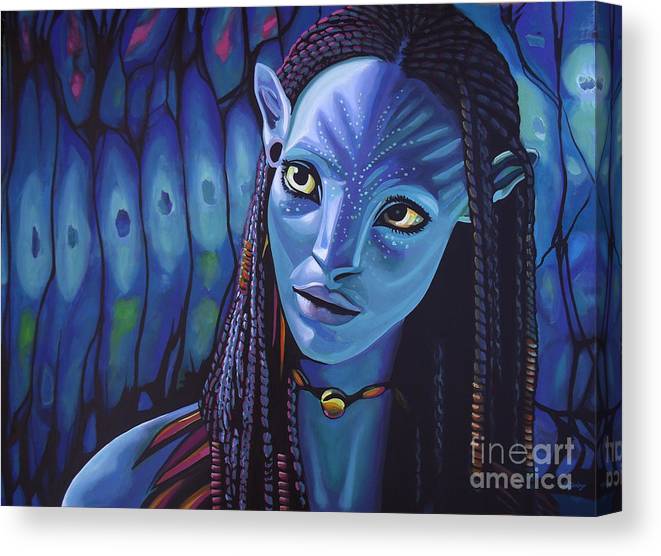 Zoe Saldana as Neytiri in Avatar canvas print by Paul Meijering.   Bring your artwork to life with the texture and depth of a stretched canvas print. Your image gets printed onto one of our premium canvases and then stretched on a wooden frame of 1.5" x 1.5" stretcher bars (gallery wrap) or 5/8" x 5/8" stretcher bars (museum wrap). Your canvas print will be delivered to you "ready to hang" with pre-attached hanging wire, mounting hooks, and nails.

Zoe Saldana as Neytiri in Avatar - Realistic acrylic painting of the American actress and dancer Zoe Saldana in her role as Neytiri in the movie Avatar, painted by the Dutch fine artist Paul Meijering - the Original painting is 90 x 120 cm and for saleZoe Saldana-Perego (born Zoe Yadira Saldana Nazario; June 19, 1978), is an American actress and dancer. Following her performances with the FACES theater group, Saldana made her screen debut in an episode of Law & Order. Her film career began a year later with Center Stage, followed by a role in Crossroads. She first gained some prominence for her role as Anamaria in Pirates of the Caribbean: The Curse of the Black Pearl.Saldana's breakthrough came in 2009 with the roles of Nyota Uhura in Star Trek and Neytiri in James Cameron's Avatar. The latter film received widespread acclaim, and is the highest-grossing film of all time. Saldana continued her successful career with films such as Colombiana Star Trek Into Darkness, and Guardians o...