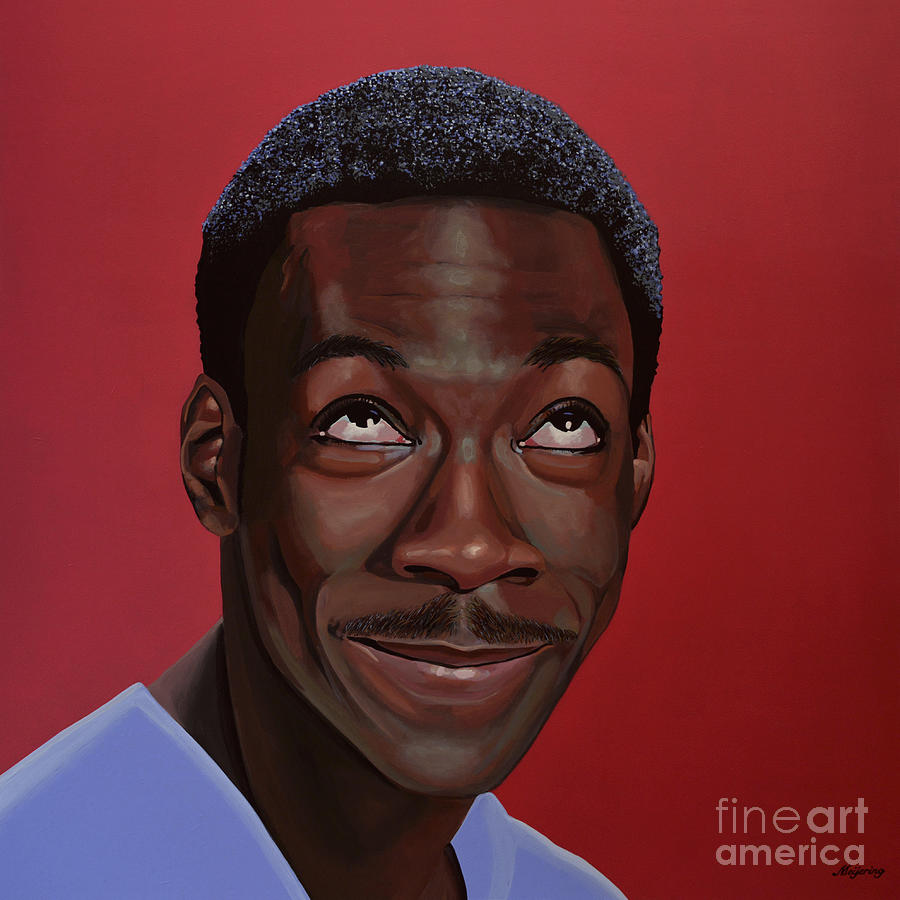 Realistic acrylic painting by the Dutch fine artist Paul Meijering of the American stand-up comedian, actor, writer, singer, and director Eddie Murphy - He has received Golden Globe Award nominations for his performances in 48 Hrs., Beverly Hills Cop series, Trading Places, and The Nutty Professor. In 2007, he won the Golden Globe for Best Supporting Actor and received a nomination for the Academy Award for Best Supporting Actor for his portrayal of soul singer James "Thunder" Early in Dreamgirls.

Eddie Murphy's work as a voice actor includes Thurgood Stubbs in The PJs, Donkey in the Shrek series and the Chinese dragon Mushu in Disney's Mulan. In some of his films, he plays multiple roles in addition to his main character, intended as a tribute to one of his idols Peter Sellers, who played multiple roles in Dr. Strangelove and elsewhere. Murphy has played multiple roles in Coming to America, Wes Craven's Vampire in Brooklyn, the Nutty Professor films (where he played the title role in two incarnations, plus his father, brother, mother, and grandmother), Bowfinger, Norbit, and Meet Dave

The Original painting is 90 x 90 cm and for sale

One of your peers nominated this image in the 1000 views Groups Special Features #19 promotion discussion. Please help your fellow artists by visiting and passing on the love to another artist in the the 1000 Views Group....L/F/Tw

Captures the on-air personality of Murphy so well! l/f and nominating for a Special Feature in the 1000 Views group.

Keep up the good work!

congratulations on your recent sale!

What a perfect capture of the "wise guy" persona of Murphy! Congrats on your sale!

Nicely done! Congrats on your sale.

Congratulations on your sale! :)