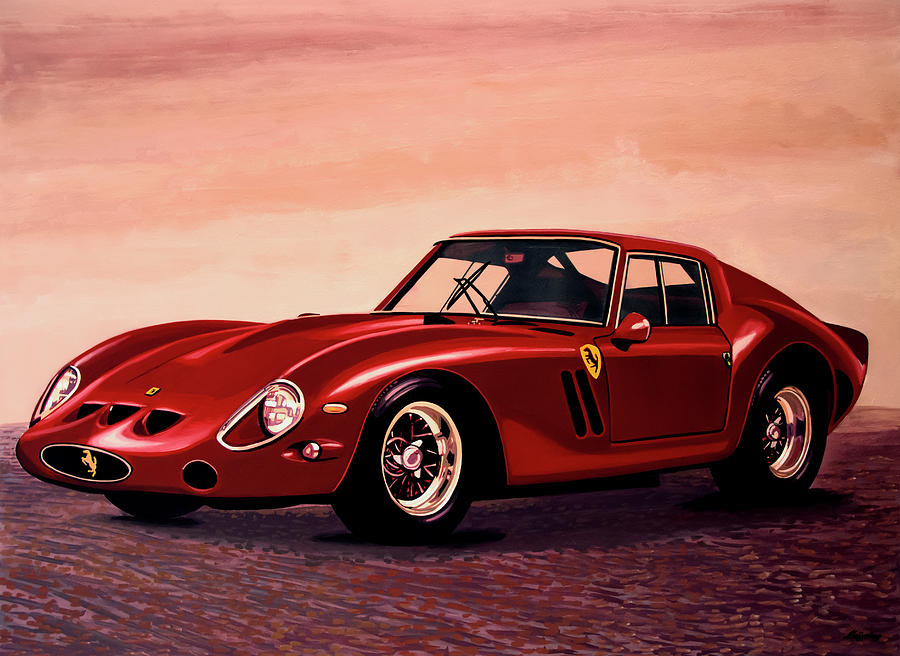 Realistic acrylic painting of the Ferrari 250 GTO, painted by the Dutch fine artist Paul Meijering - the Original painting is 120 x 90 cm and SOLD

The Ferrari 250 GTO is a homologated GT car which was produced by Ferrari from 1962 to 1964 for homologation into the FIA's Group 3 Grand Touring Car category. In May 2012 the 1962 250 GTO made for Stirling Moss became the world's most expensive car in history, selling in a private transaction for $38,115,000 to US communications magnate Craig McCaw. In October 2013, Connecticut-based collector Paul Pappalardo sold chassis number 5111GT to an unnamed buyer for a new record of around $38 million. The numerical part of its name denotes the displacement in cubic centimeters of each cylinder of the engine, whilst GTO stands for "Gran Turismo Omologato", Italian for "Grand Touring Homologated." When new, the GTO cost $18,000 in the United States, and buyers had to be personally approved by Enzo Ferrari and his dealer for North America, Luigi Chinetti.
In total, 39 250 GTOs were manufactured between 1962 and 1964. This includes 33 cars with 1962-63 bodywork (Series I), three cars with 1964 (Series II) bodywork similar to the Ferrari 250 LM and three "330 GTO" specials with a larger engine. Four of the older 1962-1963 (Series I) cars were retrofitted in 1964 with an updated (Series II) body.
In 2004, Sports Car International placed the 250 GTO eighth on a list of Top Sports Cars of the 1960s, and nominated it the top sports car of all time. Similarly, Motor Trend Classic placed the 250 GTO first on a list of the "Greatest Ferraris of All Time." Popular Mechanics named it the "Hottest Car of All Time."

Beautifully done!. You inspire me. I would love, if You could let me know what you think about my work. ;-)

Amazing work. I love it! If you have a sec, please let me know what you think about my images. I really want to progress with my knowledge

Awesome and a favorite! L/F

Fantastic Automobile and a Great presentation of the same.

Congratulations this marvelous work has been Featured on our homepage and given a Like and Favorite by the group's administrator.

Thank you so very much, John, for your compliment, support and the feature in your marvellous group!!;-))...

Really nice work! What type of acrylic paint do you use?

Congratulations on your feature with Greeting Cards For All Occasions! L

Thank you so very much, Jean, for your support and the feature in your amazing group!!;-))...

Thank you so very much, Lisa, for your support and the feature in your vibrant group!!;-))...

Thank you so very much, Robyn, for your compliment, support and the feature in your wonderful group!!;-))...