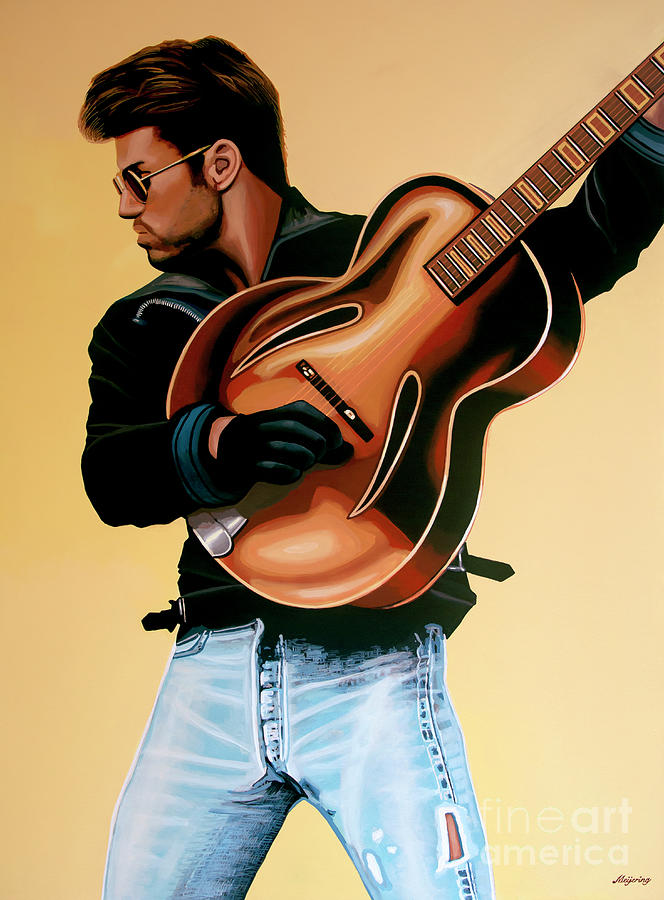 Realistic acrylic painting of the English singer, songwriter, record producer, and philanthropist who rose to fame as a member of the music duo Wham!, George Michael, painted by the Dutch fine artist Paul Meijering - the Original painting is 120 x 90 cm and for sale

Georgios Kyriacos Panayiotou (25 June 1963 - 25 December 2016), known professionally as George Michael, was an English singer, songwriter, record producer, and philanthropist who rose to fame as a member of the music duo Wham! He was best known for his work in the 1980s and 1990s, including hit singles such as "Wake Me Up Before You Go-Go" and "Last Christmas", and albums such as Faith (1987) and Listen Without Prejudice Vol. 1 (1990).

Up to the time of his death, Michael sold more than 115 million records worldwide, making him one of the best-selling music artists of all time. His breakthrough duo Wham! sold 28 million records between 1982 and 1986, and his debut solo album Faith sold more than 20 million copies worldwide. Michael achieved seven number one singles in the UK and eight number one songs on the Billboard Hot 100 in the US, including "Careless Whisper" and "Praying for Time". He ranks among the best-selling British acts of all time, and in 2008 he was ranked 40th on Billboard's list of the Greatest Hot 100 Artists of All Time. Michael won various music awards throughout his 30-year career, including three Brit Awards—he won Best British Male twice, four MTV Video Music Awards, four Ivor Novello Awards, three American Music Awards, and two Grammy Awards from eight nominations. Michael, who came out as gay in 1998, was an active LGBT rights campaigner and HIV/AIDS charity fundraiser.

In 2004, the Radio Academy named Michael the most played artist on British radio during the period 1984-2004. The documentary A Different Story (released in 2005) covered his career and personal life. Michael's first tour in 15 years, the worldwide 25 Live tour, spanned three tours over the course of three years (2006, 2007, and 2008). In the early hours of 25 December 2016, Michael, aged 53, was found dead in bed at his Oxfordshire home. A coroner's report attributed his death to natural causes.

Paul your acrylic painting of George is stunning and so true to George you have really captured his personality. Sending all my best wishes Jenny

I'll bet he would make a wonderful shower curtain!!! Gorgeous!!

Congratulations, your work is featured on the homepage of "Created by My Hands"!

What a fine piece of artwork and I am happy to announce that this beauty has been featured on the streets of the Art District group. Congratulations for this accomplishment! You may archive your work in the groups "Feature Archives & Thank You Thread"