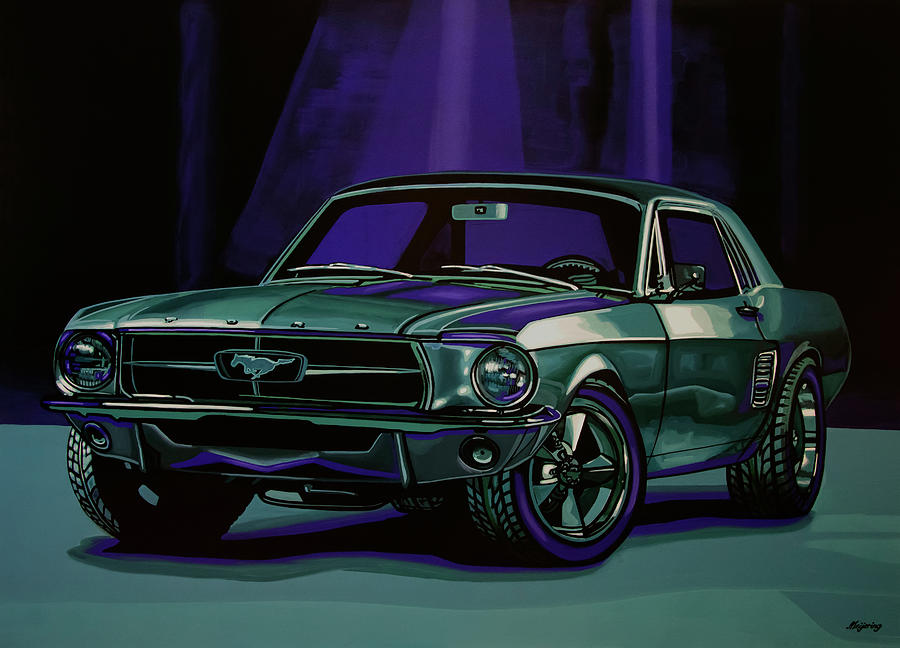 Realistic acrylic painting of the Ford Mustang 1967, painted by the Dutch fine artist Paul Meijering - the Original painting is 90 x 120 cm and for sale

The Ford Mustang is an American automobile manufactured by Ford. It was originally based on the platform of the second generation North American Ford Falcon, a compact car. The original 1962 Ford Mustang I two-seater concept car had evolved into the 1963 Mustang II four-seater concept car which Ford used to pretest how the public would take interest in the first production Mustang.

The Mustang created the "pony car" class of American automobiles, affordable sporty coupes with long hoods and short rear decks and gave rise to competitors such as the Chevrolet Camaro, Pontiac Firebird, AMC Javelin, Chrysler's revamped Plymouth Barracuda, and the first generation Dodge Challenger. The Mustang is also credited for inspiring the designs of coupes such as the Toyota Celica and Ford Capri, which were imported to the United States.

Lee Iacocca's assistant general manager and chief engineer, Donald N. Frey was the head engineer for the T-5 project - supervising the overall development of the car in a record 18 months - while Iacocca himself championed the project as Ford Division general manager. The T-5 prototype was a two-seat, mid-mounted engine roadster. This vehicle employed the German Ford Taunus V4 engine.

Art is as natural as sunshine and as vital as nourishment. 💖 🌸💖 🌸 Congratulations on your recent sale 💖 🌸💖 🌸

Excellent picture of this classic car!

“Painting is poetry that is seen rather than felt, and poetry is painting that is felt rather than seen.” ... Congratulations on your recent sale of a wonderful work!

Gorgeous painting of a favorite classic... nominated for special feature in the 1000 view group T/F.....

Congratulations, your work is Featured in "All Automotive Artworks" I invite you to place it in the group's "2020 Featured Image Archive" Discussion!! L/Tweet

Thank you so much, Lori, for all your support and the feature in your colourful group!!;-))

Thank you so very much, Robyn, for all your support, compliment and the feature in your wonderful group!!;-))

Thank you so very much, David, for all your support and the feature in your creative group!!;-))

Congratulations your work is featured on the homepage of the Pixels/FAA Group Beauty in Art! 7/19/16

Thank you so very much, Jilian, for all your support and the feature in your beautiful group!!;-))